Add your caption in the comments.
Posted by Johnny Logic at 4:54 PM 6 comments

3 more reasons to vote for Obama.

In case you didn't have enough reasons already.
Posted by ticknart at 4:54 PM 0 comments

Footprints in the Sand

There was a man who, at low tide
Would walk with the Lord by his side
Jesus said "Now look back;
You'll see one set of tracks.
That's when you got a piggy-back ride."

Rewritten by Lore Sjöberg.
Posted by ticknart at 4:36 PM 2 comments

Story of a Comic Book Monkey

If you look closely at the ads in Marvel comics and Warren magazines during the late Sixties/early Seventies, you can easily spot the ones marketing the primates. Most of these advertisements were selling them for less than twenty dollars, plus the undisclosed fee for delivery. So for a reasonable amount of money, you could’ve roamed the neighborhood like Tarzan with your own personal Cheeta. Had I been of age (or even alive), I would have purchased a squad of monkeys to be my loyal helpers in searching for the television remote, fetching cold sodas, brushing my teeth, writing my homework, and performing my altar boy duties. Realistically, one can only imagine the face of outraged parents across the country when their children unexpectedly ordered these bundles of “joy” and “hilarity.”
...
Once I decided to write this article, I searched high and low for someone who might have purchased a squirrel monkey directly from one of the old comic ads. Luckily I stumbled upon writer Jeff Tuthill’s amazing childhood account on the time he ordered his pet monkey from an issue of “Amazing Spider-Man” near the early seventies. The native New Yorker remembered being captivated by the picture of a complacent monkey seated on the palm of a human hand. 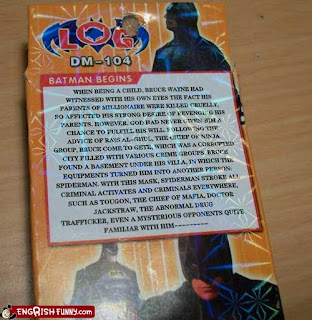 When being a child Bruce Wayne had witnessed with his own eyes the fact his parents of millionaire were killed cruelly. So affected his strong desire of Revenging his parents. However, God had never given him a chance to fulfill his will. Following the advice of Raws Al-Ghul - the chief of Ninja Group, Bruce come to Gete, which was a corrupted city filled with various crime groups. Bruce found a basement under his villa that turned him into another person: Spiderman. With this mask Spiderman stroke all criminal activates and criminals everywhere. Such as Tougon, the chief of mafia, Dr. Jackstraw, the abnormal drug trafficker, even a mysterious opponent quite familiar with him

From Engrish Funny
Posted by heels at 2:41 PM 4 comments

Just about everyone I know has already voted. But just in case, this is the #1 voting tip I've read:

If your right to vote is challenged, do not accept a provisional ballot, which deposits your name at the bottom of a very long list of problem ballots. Instead, demand adjudication from the poll judges, who are always present in each voting location, as well as a poll lawyer.

Scary, because I didn't even know about this, and probably would have taken a provisional ballot if told that was my only choice. I had no idea there were poll lawyers at each location.

Or do like me, and sign up for permanent Absentee voting. I voted 2 weeks ago, kids, from the comfort of my own home.
Posted by heels at 1:54 PM 0 comments

This is just another urban legend reflecting a strange Christian persecution complex.

Now, this is a real insult to a holiday that matters:

The American Family Association has fired the first shots of this year's War on Christmas with a pre-emptive strike on The Home Depot!

Oh, AFA, what would these next two months (and TV and movies and education and the internet) be like without you?

Edited to try to increase the irony that I was going for.
Posted by ticknart at 10:32 AM 0 comments

While in Ohio this weekend Obama said:

When it comes to the economy – when it comes to the central issue of this election – the plain truth is that John McCain has stood with this President every step of the way,” he said. “He hasn’t been a maverick, he’s been a sidekick. He’s like Kato to the Green Lantern. Ya’ll remember that, those of you who are over a certain age.

As the article states, "Kato was the Green Hornet’s sidekick, not the Green Lantern’s." (Emphasis still mine.)

The thing is, Kato (especially when played by Bruce Lee) is a totally bad-ass martial arts master who not only drives the car, but regularly beats the crap out of the bad guys while Green Hornet solves mysteries.

Green Lantern sidekicks, on the other hand, are useless. In the '40s there was Doiby Dickles, who drove a taxi around and "helped" a guy with a magic ring. In the '60s came a guy named Tom Kalmaku, quaintly referred to as "Pieface" because he was an Eskimo; he repaired planes and really wanted to be like Jimmy Olsen.

Now, which sidekick do you think McCain is more like?
Posted by ticknart at 9:43 AM 1 comments

We're going to the moon, on a bridge.

So I'm looking for a way to recycle toner, and I found an interesting claim:

In the next seven years, if all the laser and ink jet cartridges are saved from landfills, a bridge can be built from the Earth to the Moon -- 223,000 miles!

You see, engineers will eat the ink and toner cartridges, giving them the scientific nutrients they need to overcome the limitations of natural laws. Let's make this dream a reality.
Posted by Elex at 9:26 AM 0 comments

Ever wonder what Spongebob Squarepants would be like as classic comic strips?

Wonder no longer!
Posted by ticknart at 8:59 AM 0 comments

A new way to spend all day on YouTube

This is one I'm probably going to avoid. But if you have the home edition of our game, I recommend trying it out.

YouTube Warp is a way to browse videos through a full screen player, eliminating all the stuff on the screen that isn't the video. Jump from video-to video-all day in a 2D cloud of relationships.

I feel conspicuous enough with YouTube on my screen, so filling my entire screen long enough to get any joy out of the new Warp player is probably too much for me. It looks cool though.

Here's a tip: Find a link to a video you would normally have watched, and in the URL you get by clicking the link, replace the word "watch" with the word "warp.swf". This way you can use whatever you want for your start point rather than one of the few they offer on the warp page.
Posted by Elex at 8:45 AM 0 comments

I feel a serious need for Demotivators now.

Every year I am in charge of ordering our company's calendars. We went with a company this year that we hadn't used in a while because we liked their design a little more this time. Just this morning, I got an email letting me know that our order had shipped. On the top of the email, this is what it said:

Thank you for your recent order!
The trust you've placed in us adds a new dimension to our business.
(Emphasis THEIRS.)

A new DIMENSION. I created a NEW DIMENSION!

Sometimes this bullshit talk goes a little too far. At those times, I go here.
Posted by heels at 8:40 AM 1 comments