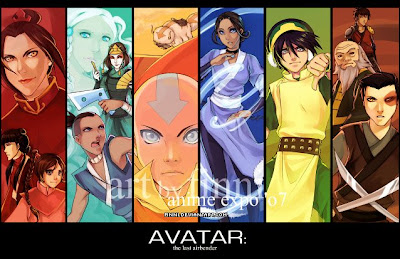 This past Monday, on Martin Luther King Jr.'s birthday, on the eve of Barack Obama's inauguration, I discovered that the casting of the four leading characters for the upcoming live-action movie, "The Last Airbender" (based on the TV show, “Avatar: The Last Airbender”) had gone entirely to white actors. I want—no, need—to say something about this.

I was speaking with Gene Yang (author of "American Born Chinese" and National Book Award nominee) about the casting and he said it best: "It's like a white Asian fetishist's wet dream. All the Asian culture they want, without any of the Asian people."

If Rathbone had gotten the role of "Shaft," and got a perm and a "tan" to play that character (and I don't mean in a self-conscious, subversive way like Robert Downey Jr. in "Tropic Thunder"), there would be a shit storm of outrage from all sectors of America, not just the African American community. It would be a headline across every newspaper, and I highly doubt that production would make it to filming. But when Joel Grey taped his eyes "slanty" and colored his skin to play a Korean man in "Remo Williams" (in 1985! we're not talking ancient history here), it went virtually unnoticed. How was that even allowed to happen? How is it continuing to happen, here in 2009, at the eve of Obama's inauguration (as I type this.) Why this double standard?

A quote that I find interesting is:

Or let me draw a closer parallel—imagine if someone had made a “fantasy” movie in which the entire world was built around African culture. Everyone is wearing ancient African clothes, African hats, eating traditional African food, writing in an African language, living in African homes, all encompassed in an African landscape...

...but everyone is white.

It's interesting because it reminds me of the racial readjustment Ursula Le Guin's Earthsea books took on when SciFi made that miniseries a couple of years ago.

Sure, the people of Earthsea are more Caribbean, Indonesian, and Filipino, but it's still the same sort of thing.

And I don't see it changing anytime soon, even if a Mexican lesbian gets elected president during the next go around.

What do we live in?

Perhaps a hologram?
Posted by ticknart at 8:33 AM 1 comments

A little while ago two Indian nationals won a pitching competition the Million Dollar Arm. I don't know the specifics of the contest but the ultimate prize was a minor league contract with The Pittsburgh Pirates (which is a good news/bad news sort of prize).

Anyway both are from rural backgrounds and know little of America or baseball. They train at USC and keep a blog of their experiences.

It's freaking awesome. An excerpt:

One very, very bad thing about the news is that they say I on the BABEWATCH. This not true. i not watching girls. i only pitching, training, eat, watch baseball/Movies and sleep. American women very dangerous and very crazy. I like only Indian woman. Dinesh and JB, Sir have been harrassing me about this BABEWATCH. I do not like the BABEWATCH.

I also learn how to play darts from Neil, sir. First time, I thinking I throw darts too hard and they no sticking. Neil, sir also claim to be real person they make Snakes in a Plane movie about. Dinesh and I not believe him anymore. He is a tricky one.

I think my favorite part is their movie reviews.
Posted by otis at 8:15 AM 3 comments