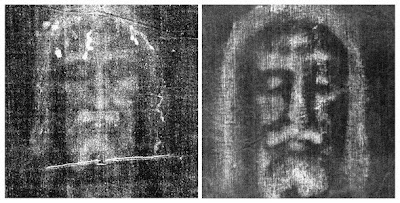 Luigi Garlaschelli, a professor of organic chemistry at the University of Pavia, reproduced the full-sized [Shroud of Turin] using materials and techniques that were available in the middle ages.

I wish Reuters said how he made it because I want to make one, too.

They placed a linen sheet flat over a volunteer and then rubbed it with a pigment containing traces of acid. A mask was used for the face.

The pigment was then artificially aged by heating the cloth in an oven and washing it, a process which removed it from the surface but left a fuzzy, half-tone image similar to that on the Shroud. He believes the pigment on the original Shroud faded naturally over the centuries.

They then added blood stains, burn holes, scorches and water stains to achieve the final effect.

Posted by ticknart at 1:08 PM 0 comments