The Best of 1966 Batman/Bruce Wayne

For Richard:
Posted by Johnny Logic at 10:14 AM 1 comments

The First Lady of Star Trek 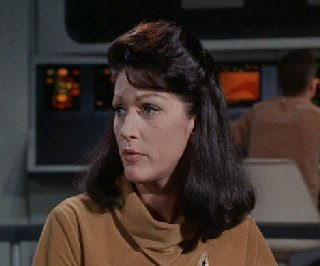 The picture is her playing Number One in the original Star Trek pilot. She was also Nurse Chapel in TOS and appeared as Lwaxana Troi in TNG and DS9 and she regularly played the voice of the Starfleet computers from the 60s until Voyager ended in 2001 and had been cast to do the computer's voice in the new movie. I don't know if she completed the work for the movie.

She also produced two science fiction TV shows based on notes left by her late husband and guest starred in them, too.

Two beautiful, vibrant women dead in two weeks. I sincerely hope that these sort of things don't really happen in threes.
Posted by ticknart at 8:41 AM 1 comments

What a Way To Go.

If you get me one of these for Christmas, I'll really know what you think of me.
Posted by heels at 8:37 AM 0 comments