My friend Hannah just instructed me to look up Schadenfreude Pie. MOST excellent.

My guess: Dark. Rich. And oh so bittersweet.

And you know what? That’s exactly what it tastes like. Also — and this is really just a perfect but unintentional extension of the whole schadenfreude metaphor — you really only want a small slice; too much of this pie and it’ll sit in the pit of your stomach like a rock of judgment, pulling you down. Small slice? Excellent. Big slice? You’ll regret it. Just like schadenfreude itself. 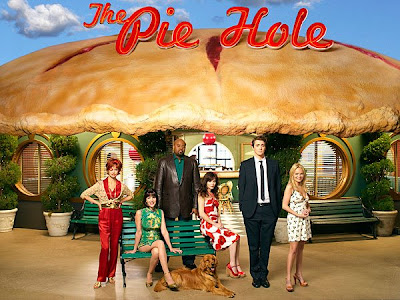 It'll be a comic published at DC, or at Wildstorm, which is owned by DC.

Fuller says, "[I]t starts a new story. It’s basically Chuck, Ned, Emerson and Olive versus 1,000 corpses, so it becomes a zombie movie, but the zombies are articulate and smart and can do things that no other zombies can do."

Last week he talked about how he wants to run the comic:

I am going to pull together the Pushing Daisies writing staff. It will be run like a writer’s room, where I will write the first story, and we will arc out the other issues, which will comprise what we were going to do in the back nine. We’ll also make it accessible for those who are not familiar with the TV series, as well as introducing villains we couldn’t do on ABC.

As the Televisionary reminded me in his post about the last episodes, the first of the final three episodes airs on May 30th.
Posted by ticknart at 11:40 AM 2 comments

It's a cool smart flash game. My web host's newsletter pointed me to it, I played it a couple times, and it's really neato.
Posted by Elex at 8:58 AM 0 comments