Speaking of new movies, I've got a good one for ya. 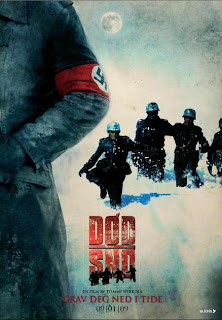 For eight medical students, Easter vacation begins innocently enough. They pack their cars full of ski equipment and enough beer to fuel their escape from everyday life to the snowy, isolated hills outside of Øksfjord, Norway. Once there, they receive a late-night visit from a shady hiker, who tells them a story about Nazi occupation of the area during World War II. After doing their fair share of raping and pillaging, the dreaded battalion faced a brutal and vengeful uprising by the citizens of the town. The soldiers who managed to survive the onslaught, including their dreaded leader Colonel Herzog, were driven into the hills by the angry mob, where they supposedly froze to death, never to be seen again. But if the horror genre has taught us anything, it’s that the raucous behavior and promiscuity of the younger generation always have a way of bringing evil spirits back to life.

Check out the trailer linked above. The cheese looks to be high with this one, but dammit! I may just have to find a way to see it anyway.

(Thanks to Sweetney at MamaPop for finding this. Excellent!)
Posted by heels at 4:45 PM 4 comments

Check out Wired's list of upcoming movies. Good and not so good looking stuff coming soon.
Posted by Johnny Logic at 2:25 PM 1 comments

The BBC brings us its favorite Bushisms.
Posted by ticknart at 10:39 AM 0 comments

The New Yorker cover was certainly the dumbest of non-stories this year. Well, other than Brett Favre.

I remember a lot of arguments about the price of oil during the summer where I was derided as hopelessly naive for saying that since oil was just commodity like any other, a price increase did not mean that that we were on the brink of running out of it.

Hilary's tears were sorta interesting, because it did raise the question of how the press and the voters were going to act toward a female presidential candidate.

Never really cared about Jeremiah Wright. I imagine that I would think that what most Pastors say in church sounds pretty nuts to me. See Johnny Logic's entry from yesterday.

ESPN's crazy over hyping of Brett Favre caused Chad Pennington (the man he replaced) to fall to me way lower in my fantasy draft than he should have. I had a good long laugh when Pennington put up better numbers than Favre, and did his best to help me mock my coworkers.
Posted by otis at 8:41 AM 0 comments