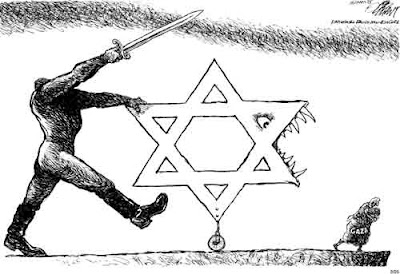 Pat Oliphant's outlandish and offensive use of the Star of David in combination with Nazi-like imagery is hideously anti-Semitic. It employs Nazi imagery by portraying Israel as a jack-booted, goose-stepping headless apparition. The implication is of an Israeli policy without a head or a heart.

Israel's defensive military operation to protect the lives of its men, women and children who are being continuously bombarded by Hamas rocket attacks has been turned on its head to show the victims as heartless, headless aggressors.

To me, the comic is anti-Israel, not anti-Semitic.

I know it's hard for people to separate people following a religion and living all over the world from a nation based on that religion, but, come on, they're not the same thing. Ever.
Posted by ticknart at 8:52 AM